> English Editions>Saint Paissios Velichkovski, the Elder of Moldavia. Life and Teaching on the Jesus Prayer 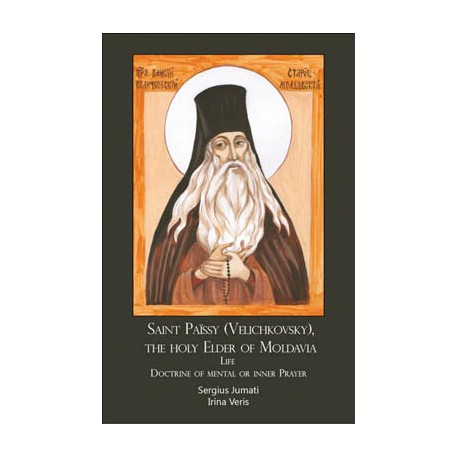 Saint Paissios Velichkovski, the Elder of Moldavia. Life and Teaching on the Jesus Prayer

The present work is based on several biographies of Elder Paissios, including his autobiography. Most of all the work of Archpriest Serge Chetverikov ‘Moldavian Elder Paissios Velichkovski, his life, teaching and his influence on the Orthodox regular clergy’ has been used. The issues which are dealt with in the present book are still actual today.

Epochs of relative spiritual poverty alternate with periods of spiritual prosperity. In each century however there can be found spiritual torch-bearers, who showed the path to their contemporaries, who revealed to them God’s will; through them and around them the Divine, sacred inner of the Church could continue to be built and the Church could continue its creative work.
The narrow monastic path of Saint Paissios of Moldavia (Velitchkovski) (1722 - 1794) was for the 18th century a spiritual achievement with the same degree of influence as the ascetic practices of Saint Sergius of Radonezh in the 14th century. Being inspired by the works of the holy Fathers, they, by God’s mercy, accumulated the most elevated personal spiritual experiences and transmitted them to hundreds of disciples. In this way the great saints have changed the spiritual climate of their epochs, filling it with the warmth and fire of the Holy Spirit.
Archpriest Serge Chetverikov wrote about Saint Paissios: ‘Even if the entire work of Elder Paissios consisted in just being an example of sanctity, creating a monastic communal brotherhood according to the rules of the holy Fathers and correcting the translations of the works of the holy Fathers, it still would be a great contribution to the Church, monasticism and society. However, Elder Paissios has accomplished much more than that: he created a school of  spiritual life, he kindled the hearts of many with love for the spiritual life and he inspired the monks to pursue the inner, monastic, spiritual work. Owing to his influence there have been amongst the Orthodox monks many remarkable ascetics, who fully assimilated the admonitions and the instruction of Elder Paissios. The followers of St. Paissios had much influence not only on their fellow-monks, but also on laymen from all the layers of society, including those highly educated in the cultural, scientific and theological areas. Having started in the second half of the 18th century, this particular spiritual tendency continued its development until the tragic events of the October revolution in Russia at the beginning of the 20th century.’